This was our little first descent for 2016. It started as a little exploration of one of those...cracks that we see on our way to other canyons: Is that a "Thing"?

We scrambled to the bottom of the first drop. That looks like 60', 70' rappel. Back at home, snooping the area with satellite images and topo maps, the area above did not show much promise. Still we came back with gear to scramble our way to the top, and drop.

We got to the rim and found a way to drop to the wash: Virgin wet sands. We explore and enjoy the area, then we proceed to descend. We look around and there are no signs of slings, bolts, dead-mans....nothing. It's all us, a fresh problem!

Candidates for an anchor: A tree high-up on the rim. Farming a rock into a pothole for a dead (drowned) man. A 30' extended sling around a big friendly boulder. Use a stack of potshots. This was one of those situations where the closer you get to the drop, the anchoring options become slimmer. The tree was too far up and back, our 120' will not do. The long sling felt...dirty, not a clean solution. The deadman required trashing about 30' of canyon fluted walls to reach the intended pothole. So we opted for 3 stacked potshots against a good lip. The only problem was that in front of that lip, there was still another small pothole that could catch the potshots during the pull. And moving the potshots further near the drop, will prevent us from load testing them. After filling the 3 potshots with sand and stacking them, they felt bomber solid. The trick was the pull. So I chained them real far apart. 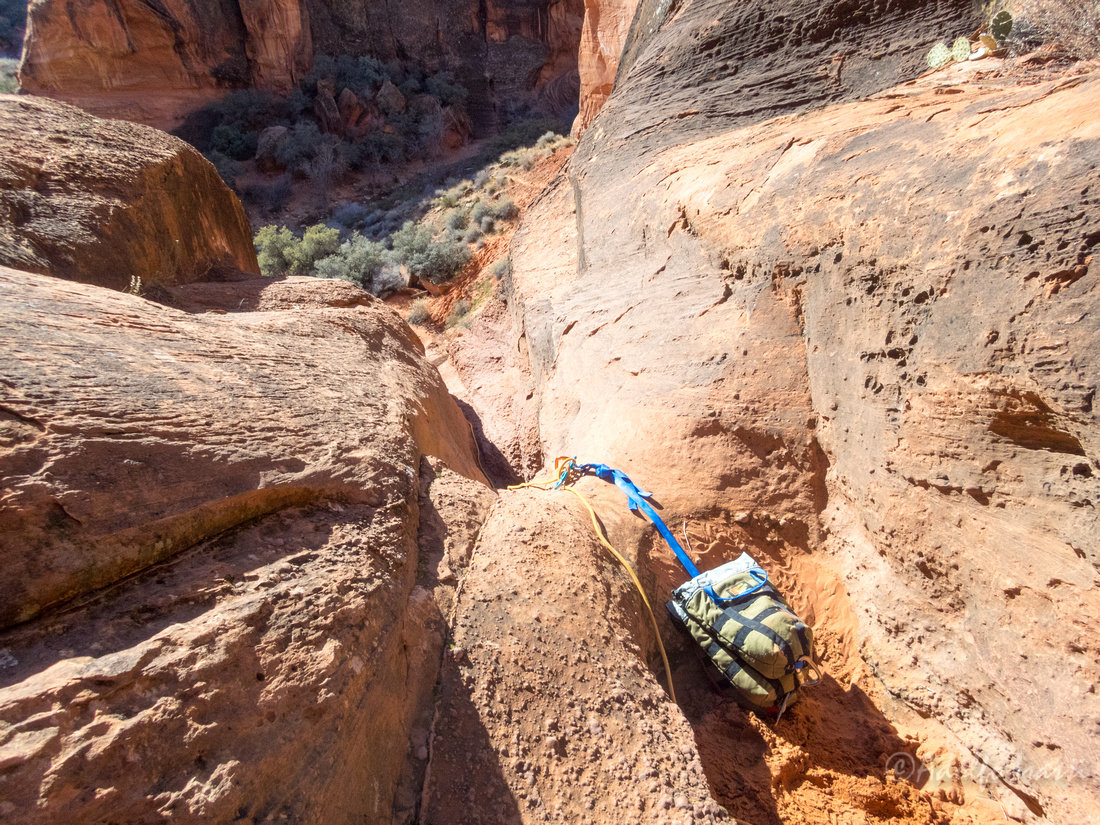 Potshots stacked against the lip. For the first person down, a sling was used to extend the reach for a releasable block. For LMAR, sling was removed and a  double bowline + double fisherman was used to fix the rope to the bottom potshot. 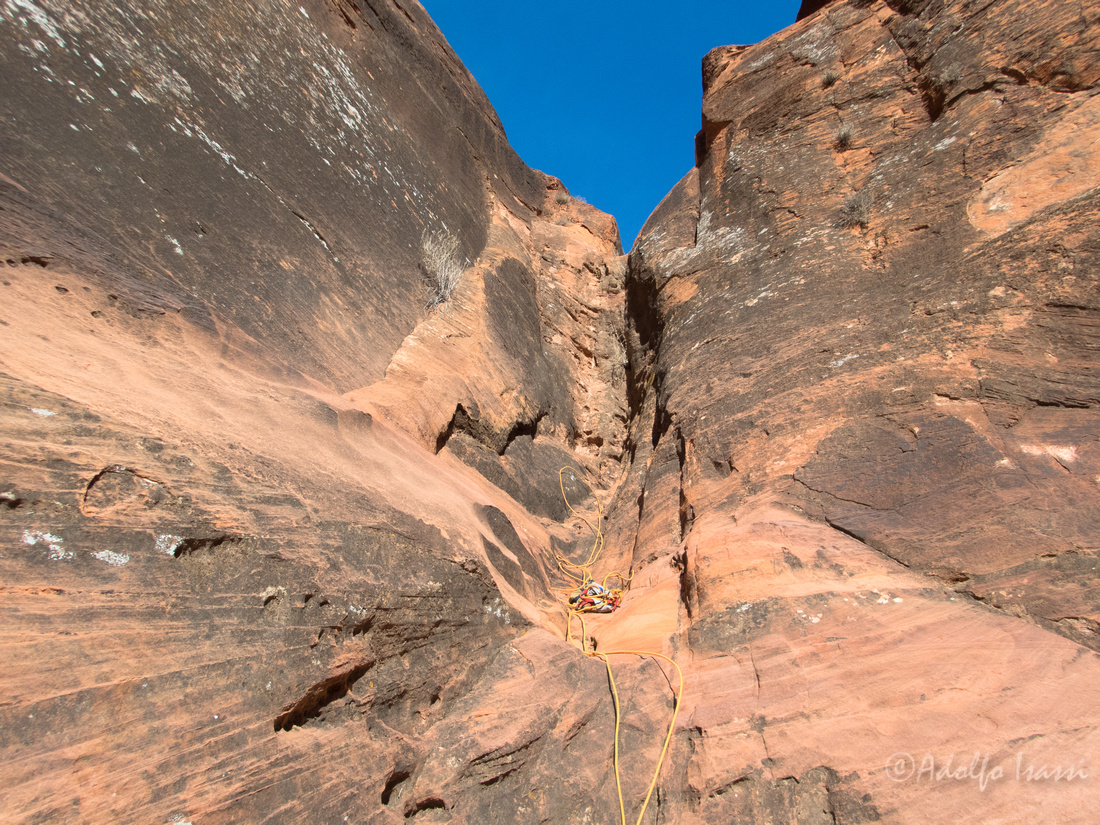 Potshot chain coming down the cliff 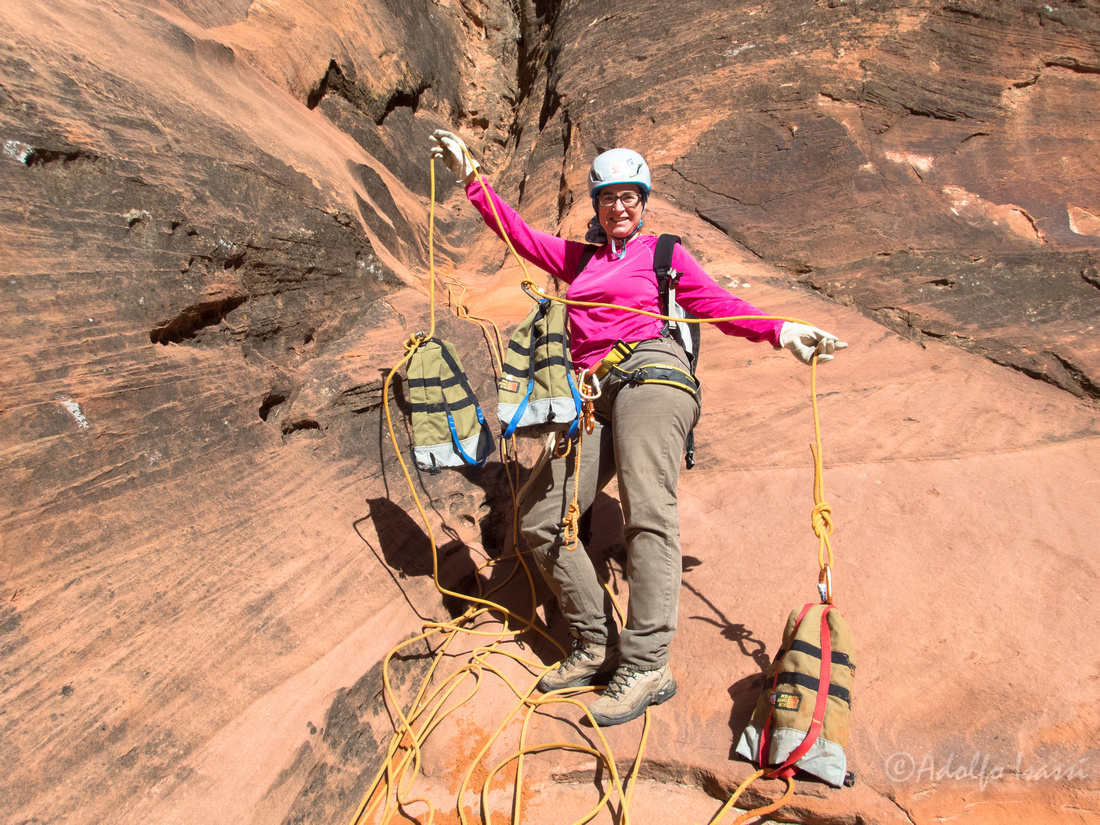 Clean potshot chain pull. The trick was to chain the potshots far apart, so each one could clear the potential jam individually.

Adolfo Isassi(non-registered)
Warning:
Pay attention to Tom Jones' comments below. If you are looking for a ghosting anchoring solutions, there are newer, better tools.
Adolfo Isassi
Interesting. I would be very interested in reading and learning what sort of problems you experienced with this technique.
I consider this technique a....last resort, and to be used with great care when the conditions call for it.
I have considered the Sand Trap, but since it can be used only for one thing (anchor), and the potshots can be used in 2 ways (that I know of): Anchors and pothole escape...they seems more versatile as tools to carry.

We tried that quite a bit several years ago, and they proved problematic and tricky. In other words, only occasionally useful - NOT a powerful tool. Kinda like using pliers to work on your car rather than a socket set and spanners.